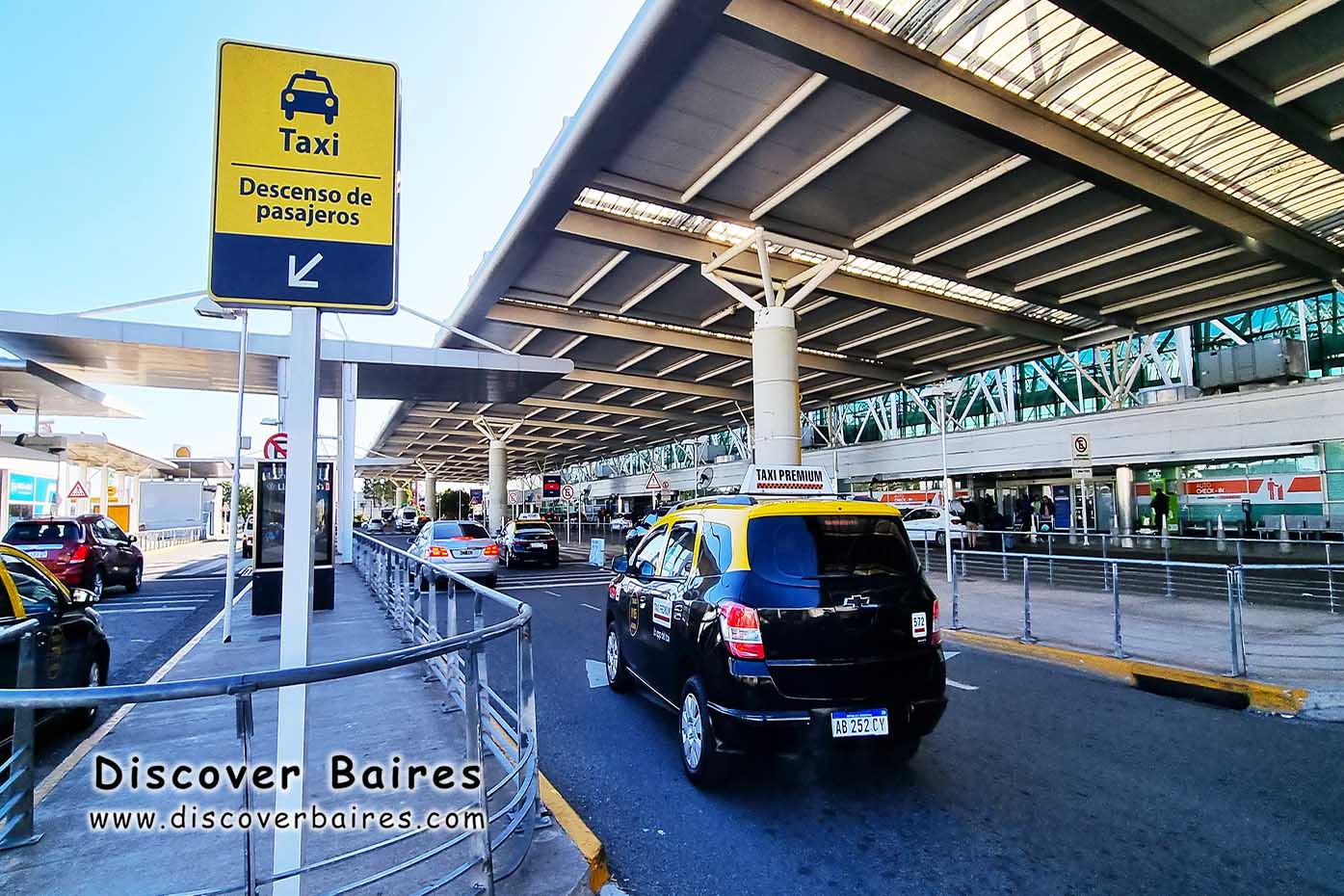 At the “Ezeiza International Airport” you will find several options to make your transfer, it will depend on the budget you want to spend. Let’s take a look at the different options available to you:

* Taxis and private car agencies: Once you collect your luggage and go through immigration and customs, which takes about 50 minutes, the first options you will find at the terminal are the different taxi and private car agencies (known by locals as “remises”). At the airport, both taxi and private car agencies work with the same system: They will ask you which hotel you are going to and depending on the location of the hotel they will inform you of the final rate that you must pay in advance. Payment can be made by credit card, debit card or cash in both pesos and dollars. The name of the official taxi company at the airport is “Taxi Ezeiza Oficial” and the private car agencies are: “Transfer Express” and “On Baires Transfer”. If you decide to use the taxi or the private car agencies service, you should go exclusively to one of the these three officially authorized stands located inside the terminal and avoid the opportunists. You should always stay alert, because sometimes there are fake taxi drivers walking around, who will approach you and offer to take you to the city. If this happens to you, distrust that person and reject it immediately.

* Apps: In the event that you prefer to use an app on your mobile phone, keep in mind that you have free Wi-Fi inside the terminal. The apps that are already operating in Buenos Aires are: Uber, Beat, Didi and Cabify among others. In Argentina, these apps, in addition to accepting payment by credit and debit cards, also accept payment in cash (just pesos).

* Car rental: Inside the main hall of the terminal you will find the different stands of car rental companies, they are: Hertz, Avis, Localiza and Alamo. The “Ezeiza International Airport” and the city center are communicated by a highway, it is just 35 kilometers (22 miles). It is maintained in good condition and well marked, in fact, most of Buenos Aires has a good road system and wide avenues, which will make it easier for you to drive if you rent a car. But what is really difficult is finding a place to park. If you decide to rent a car you should also take into account the two tolls that you must pay on your way to the city.

* Buses: Since there is no train service between the “Ezeiza International Airport” and the city, at the moment, the cheapest option to get to the center of Buenos Aires is by bus. A shuttle bus operates at the airport providing services day and night. This shuttle bus service has a stand inside the terminal where you can buy the tickets and it is called “Manuel Tienda León”. Finally, there is only one public transport to get to the city center: it is the city bus number 8 (city buses are known as “colectivos”). To get bus number 8, you have to look for the bus stop outside the terminal. It is the cheapest option but the journey takes between 2 and 3 hours. If you decide to take the city bus number 8, just keep in mind that the only way to pay in the public transport system is by using a prepaid magnetic stripe card called “SUBE”, which you can purchase at the kiosk inside the terminal. In case you buy this magnetic card you could use it later to get around Buenos Aires.

There is also another airport in Buenos Aires called “Aeroparque Jorge Newbery”, but it is used only for domestic and regional flights (Brazil, Chile, Uruguay, Bolivia and Paraguay). In the event that your flight comes from one of these countries, you could land either here or at the “Ezeiza International Airport”, so pay attention to your ticket (remember to check the airport code on your air ticket: AEP for “Aeroparque” and EZE for “Ezeiza”). The  “Aeroparque Jorge Newbery” is located within the city of Buenos Aires (in Palermo neighborhood), so it is much easier to get to your hotel. It is just 2 kilometers (1.24 miles) away from downtown. You will find here the same options as the ones I mentioned before for “Ezeiza International Airport” (taxis, private car agencies, apps, car rental, shuttle bus and city buses). How much time does it take to get from “Aeroparque Jorge Newbery” to downtown? The ride takes just between 15 and 30 minutes.

These are all the options you will find once you arrive at the “Ezeiza International Airport” (EZE) or at the “Aeroparque Jorge Newbery” (AEP) airport. As you have seen, the options are varied and for all types of budget. I hope this information helps you plan your transfer in advance, so that you can get to your accommodation as soon as possible to enjoy this fascinating city.